If the automatic budget cuts set in motion back in 2011 – known as the “sequester” – go into effect soon, as will be the case without Congressional action, people will die. At least that is if the level of rhetoric to which President Obama has now lowered himself to bears any actual resemblance to reality. (Let us leave out for now that politics seldom ever really bears any resemblance to reality to begin with.)

Speaking in front of cameras Tuesday – and flanked by uniformed first responders otherwise known to political cynics as ‘prop people’ often used for emotional, rather than rationale, appeals – Obama warned of the following (abbreviated to prevent potential reader nausea):

“Emergency responders … their ability to help communities respond to and recover from disasters will be degraded… FBI agents will be furloughed. Federal prosecutors will have to close cases and let criminals go… Hundreds of thousands of Americans will lose access to primary care and preventive care like flu vaccinations and cancer screenings.”

Who, according to Obama, will be to blame for these supposedly outrageous “meat-clever”-type cuts? The usual suspects: “Congress.” Or what he really means: Those evil, rich-loving Republicans who only cater to ‘special interests.’  Never mind the minor detail that the sequester was actually the Obama administration’s idea. In fact, Obama was at one point adamant against backtracking on it. In November of 2011, he warned, “I will veto any effort to get rid of those automatic spending cuts – domestic and defense spending.” He added, “There will be no easy off-ramps on this one.” 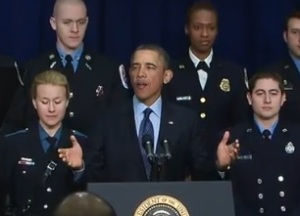 But don’t sweat the details, right? Political rhetoric is much more preferred in situations like this. And none is more preferred than the rhetoric that claims this sequester actually represents ‘cuts’ – and the “meat-cleaver” kind at that! Unfortunately, in ‘Washington-speak,’ most references to ‘cuts’ are really just slow-downs in the rate of projected growth. Assuming the sequester takes place, the federal budget will actually still grow by $2.4 trillion over the next 10 years. Translation: We’re still going to spend more, just not as much as we had originally planned. Similar to as if an employee were to get a slightly smaller raise instead of larger raise, only employers usually actually have that money to spare for the slightly smaller raise.

Over 10 years, the amount ‘cut’ under the sequester will only be around $1.2 trillion. For illustration purposes, the federal government’s budget deficit was more than that in 2011. Meaning we are already over-spending by more than that each year. Our total debt (accumulated annual deficits and associated interest) is now over $16.5 trillion and growing. The sequester amounts to less than eight percent of our existing national debt. To simplify it, that is less than half in percentage terms of just the traditional down payment for a mortgage (20 percent). If only a typical homeowner was so lucky as to get away with only paying eight percent of their home’s total price and calling them and the bank even.

And some of the larger drivers of our debt, entitlement programs, are mostly left untouched since the sequester only addresses “discretionary” and defense spending. To that end, there are others on the Republican side and close to the Defense Department warning of the supposed devastating effects these cuts will have on our national defense – one of the larger parts of our budget actually impacted. Never mind that in 2011 U.S. military spending amounted to more than that of at least the nine next-highest-spending countries combined – or about 41 percent of the entire world’s military spending. Is there really no room for some trimming?

What does all of this mean? Hardly anyone in or around Washington is serious about fiscal responsibility and prepared to make the hard, but necessary, choices to correct our unsustainable spending pattern. Who is really to blame? Not Republicans, despite what Obama may say. Not Obama, despite what Republicans may say. The people who vote for this stuff are the ones to blame. Yes, that means us.

Unless we as voters start to take fiscal responsibility seriously and actually vote budget-conscious individuals into office, no amount of political rhetoric or slow-downs in just the growth of government spending will do. We will need multiple sequesters to even begin to fix our problems. It is doubtful we voters could stomach real cuts though. The people we keep re-electing certainly cannot even fathom the idea.

This entry was posted on Wednesday, February 20th, 2013 at 12:28 am and is filed under Economics/Business, National Security/Defense, Politics/Government. You can follow any responses to this entry through the RSS 2.0 feed. You can leave a response, or trackback from your own site.

One Response to Sequester? I’ll Take Two, or Three, or …