Do they really think they can keep fooling people? Hopefully, there won’t be a sequel.

With the release of both President Obama’s and Vice President Biden’s 2009 tax returns last week comes some revealing information. Though the Obama’s reported that less than 6 percent of their $5.5 million income went to charity, the most interesting tidbit is that the Bidens gave less than 2 percent of their $333,000 income to charity. Even the standard church tithe — considered a charitable donation — is supposed to be 10 percent.

Far be it from me to criticize anyone for the amount of their charitable donations. Under normal circumstances, a person’s private giving wouldn’t be a point of criticism; it is, after all, a matter of personal conscience. However, these low levels of charitable donations, particularly on the part of the Bidens, stand out because of  earlier statements from Obama and Biden asserting that we need to “spread the wealth around” and that paying more taxes was the “patriotic” thing to do.

END_OF_DOCUMENT_TOKEN_TO_BE_REPLACED

President Obama and Vice-President Biden were recently in Tampa touting funds from the “recovery” (read: government spending money it doesn’t have) act that will go toward creating a high-speed rail line in the area (between Tampa and Orlando). The federal grant will total $1.25 billion. That’s 1.25 billion more dollars the federal government doesn’t have unless it borrows more, prints more or taxes more.

And as a reminder, despite projections from politicians and special interests in favor of them, these types of systems don’t always pay for themselves (I wrote in more detail on this subject in a previous blog). This is just another example of government redirecting the economy, because politicians believe they know how to  “invest” (read: spend) taxpayer money better than the taxpayers do. 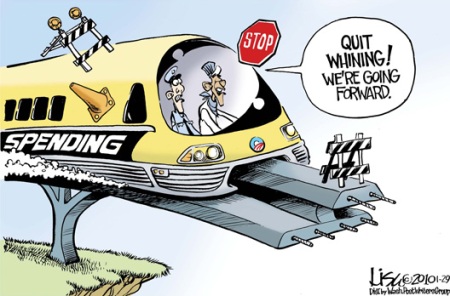 Obama told the crowd in Tampa the following:

I’m excited. I’m going to come back down here and ride it. Joe and I — you all have a date.

It seems that politicians are never more ecstatic than when they are bragging about spending other people’s money.

I know it’s an older video, but this keeps getting funnier each time I watch it. Keep in mind that the man Biden is referring to is in a wheelchair =)