Today, I had the honor of partaking in the civic duty of jury duty once again. If you’ve never experienced it, imagine waiting in your doctor’s waiting room the whole day instead of just a few minutes — minus the part at the end where you get something to make you feel better.

I wrote a column for the Tampa Tribune several years ago on my first experience with this mind-numbing process lamenting the amount of hours jurors are required sit in a large room on uncomfortable chairs waiting on their name to be called. The lucky ones are those who get to wait the whole day without their name ever being called — sort of sadistic isn’t it? 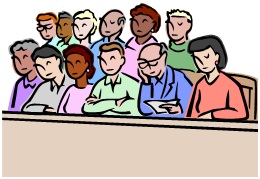 After that first experience, imagine my surprise this morning when I was in the first group to be pulled out of the large waiting room to go through the actual juror selection process. Regardless of if I was going to be picked or not, I would be getting through this quickly this time!

END_OF_DOCUMENT_TOKEN_TO_BE_REPLACED

Tomorrow is “Sanctity of Human Life Sunday.” My former Tampa Tribune colleague Sheryl Young has written a good summary of the purpose of the day and some important information regarding abortion for the online magazine The Underground here. A site with information on the day as well as useful materials can be found here.

Excerpts from one of my previous posts on unincluded abortion amendments in the Senate Finance Committee health-care “reform” bill were included in a recent post from Sheryl Young, one of my fellow former Tampa Tribune community columnists, at her blog “20-20 Faith Sight.” Thanks to Sheryl for referencing the information in my blog!

In his latest column, Thomas Sowell takes aim at Obama’s search for a new jurist who displays “empathy” to replace retiring Supreme Court Justice Souter. Forget just being impartial and enforcing the law. Judges apparently now need to feel sorry for certain groups of people. Apparently “empathy” is the new code word used by liberals to describe activist judges. During the run-up to the confirmation hearings for Chief Justice Roberts I wrote a column for the Tampa Tribune on liberals seeking “mainstream” judges — apparently the code at the time.

A recent column for the Chicago Tribune highlights the justification used by liberals to promote judges who can empathize with people:

There is, after all, a profound civility in understanding how a teenager might feel deeply humiliated by being strip-searched at school or why a woman might feel she can’t complain to a male boss about being paid less than male co-workers.

The question for a judge should not be how the alleged victim felt in a given situation, but rather what the law states. It is, after all, their job to interpret the law, not make decisions based on feelings.

On a personal note, I can’t wait until the confirmation hearings. During the Roberts hearings I became a C-SPAN addict.